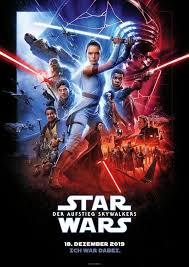 Going into this movie, I was very uncertain about the quality of the storytelling. The last two movies, Star Wars: The Force Awakens and Star Wars: The Last Jedi, felt uninspired to a degree. This movie, however, seems to make up for lost ground. It adds a whole new plot point that seems kinda spontaneous and unnecessary to an extent. The opening crawl states that “Emperor Palpatine”, the antagonist of the saga who was thought to be dead, has magically returned. His “resurrection” into the saga comes across as if Disney and J.J Abrams are trying to make a last attempt to pander to longtime Star Wars fans. His general appearance in the movie is lazily told in the opening crawl and audience members have no choice, but to accept it. Ian McDiarmid, no doubt, does a stellar job portraying the grotesque emperor, but his inclusion just feels rushed and sloppy.

The late Carrie Fisher also reprises her role as “General Leia Organa”, because of her unfortunate passing, the filmmakers made use of the archive footage from the last movies and movie magic to make her seem alive still in the movie. Generally, it looks pretty good, but it doesn’t go unnoticeable due to news, media, and the life that Carrie fisher brings to her movies.

The movie had some glaring story-telling flaws, but the visuals were a breath of fresh air. Like most Star Wars movies, there was a significant amount of space visuals and lightsaber duels, both of which were very visually striking. The lightsaber duels seemed to combine the advanced choreography of the prequels and the subtle nuances of the original trilogy. All in all, the movie was fine. There were some discrepancies in the storytelling, but the striking visuals seemed to compensate to an extent. With 10 being the best and 1 being the worst, I give this movie a good 6/10.