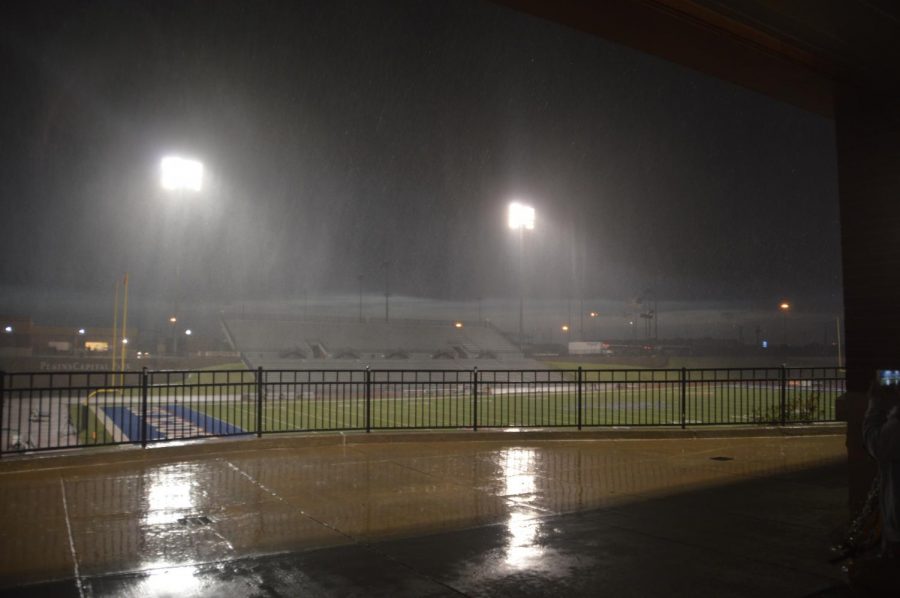 During the game against Palo Duro last Friday night, Westerner football fans were disappointed by the arrival of a storm. Along with the thunder, lightning, and rain came the late-night delay and similar thoughts from fans.

Autumn was hoping to hang out with a fellow Sophomore and watch the game, but was discontented by the torrential rain. She and her friends were instructed to wait beneath the concession stand with others for shelter from the rain and to protect from lightning strikes.

“This was my first homecoming game,” Freshman, Kailee Sebesta said, “I was excited to see Lubbock High win, but now I’m sad and soaked!”

Ecstatic to attend her first homecoming game, Kailee was going to be sad if Lubbock High was to lose. To her disappointment, the storm delayed the game and she was unable to stay and watch the delayed game.

Castillo was among the other cheerleaders disappointed by the delayed game. She was disappointed more-so with it being her last homecoming game in high school. She hoped to be able to cheer with her teammates and watch the game. Despite her disconcert by the rain, Castillo felt that if Lubbock High didn’t win, it would be a very close game.

“I went up to the press box, and I was up there for the next five straight hours waiting for the lightning and rain to stop” LHS assistant principal, Shane Anderson, said.

Mr. Anderson was among the many that showed up early for the game that night. He stayed until the game started at eleven, surprised by the amount of students that filled the student section. He was sure the team was glad for the support of everyone who stayed around for the end of the game.

Once the game resumed, LHS Senior, Megan Acebedo, was crowned Homecoming Queen at halftime. The rainy night ended with the loss of Lubbock High to Palo Duro with a score of 54 – 14.